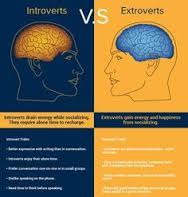 Humans are social being and hence prefer socializing, be among people, speak, enjoy, sing, dance with others. However, there are some people who find it difficult to be in the company of others.

If you’re among those who prefer to read book at a nearby book store than to attend a social gathering or listening to music in a park than to party hard at a club or disco, then you’re an INTROVERT.

Often, introverts are considered as shy and unfriendly, however, the right definition of such people states, “Those who tend to be preoccupied with their own thoughts and feelings and minimize their contact with other people”.

While it has been a subject of great discussion what makes people introvert and extrovert, science has begun doing investigation on this front. And the findings reveal that extroverts and introverts are born, not made.

Being extrovert or introvert doesn’t only reflect your attitude or your behavior; it actually refers to your relationship with social interactions.

So, let’s learn why extroverts are stimulated by social interaction whereas introverts find it similar to food poisoning.

The reason why the brains of introverts and extroverts differ from each other is because of the way they react to Dopamine – a neurotransmitter.

Dopamine is a chemical that motivates us to react to the nearby surroundings, when released. While the brains of both introverts and extroverts have equal amounts of dopamine, they differ in the way dopamine reward network performs activity.  While the dopamine reward network is more dynamic and energetic in the brains of extroverts, it is not the case in introverts. Hence, extroverts feel happy and energized when they anticipate a social event, whereas the introvert feels over stimulated.

Preference to one side of the nervous system over other

While both introverts and extroverts use both sides of the nervous system, sometimes introverts tend to prefer using parasympathetic response allowing them to remain calm and act in a measured way.

Relation with a special neurotransmitter – Acetylcholine

Introverts rely on a different neurotransmitter Acetylcholine. It is related to pleasure making a person feel good, particularly when they turn inward. Acetylcholine provides introverts the skill to reflect and emphasize entirely on a single task at a given time. When there is limited external stimulation, it is natural for the introverts to opt for a calm environment turning inwards.

More gray matter in the brains of Introverts

According to a research, introverts have greater and thicker gray matter in the front part (prefrontal cortex) of their brain. It is an area in the brain that is associated with abstract thinking and decision-making. On the other hand, extroverts have thinner gray matter in their prefrontal cortex. This means that introverts dedicate their energy and resources to abstract thinking while extroverts have the tendency to live and enjoy a moment.

So, now do you know why you’re an INTROVERT???